Will I Have Jurors at My Hearing? How Many Jurors? – Carpey Law of Philadelphia 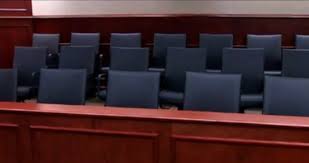 How Many Jurors Decide My Personal Injury Case?

This is a very relevant question that many clients ask me.  For example, one of my recent clients asked me this as I was picking a jury at the start of her case. She thought the jury’s verdict had to be unanimous. This is a common misconception. In reality, under Pennsylvania law, a verdict of five-sixths of the jury is what is required for a verdict.  For instance, in any medical malpractice accident, motor vehicle accident, fall down accident, or any other type of personal injury case a verdict is reached if  5 out of 6 find in your favor. In fact, at the close of a case, the judges will “charge” or instruct the jury with the following statement:

“In civil cases in the Commonwealth of Pennsylvania, it is not necessary to achieve a unanimous jury verdict, that is, that all of you agree on a verdict. It is only necessary that seven (five if there are six jurors, six if there are seven jurors, or ten if there are twelve jurors) jurors agree upon a decision.” – Stuart Carpey

How many jurors will be at my personal injury case in Philadelphia? Montgomery County, Chester County, Delaware County etc?

Juries in Pennsylvania usually consist of 12 members but can be reduced to 8 members. This means that in a civil case, you may get a jury of 12, but it can also and frequently is 8 or 10 jurors. Typically a trial commences with 8 jurors, plus alternates. In Philadelphia, if the jury starts with 8 members, but 2 jurors absent themselves, a verdict can be reached with as few as 6 jurors. Other counties in Pennsylvania have different rules. Judges do not want to “use up” too many jurors because they feel they may need them for other cases. However, it isn’t just up to the judge. Your attorney has to agree to a jury of less than 12 members. As a trial attorney, I usually agree to a smaller jury.

Pennsylvania also has the 5/6ths rule. That means that only 5/6ths of the jurors have to agree in order to reach a verdict. This applies to all parts of the case that the jury is deciding on, ie: liability and damages.

Keep in mind that these rules are for a civil case. Criminal cases are different because the jurors need to reach a unanimous verdict.

These rules generally apply in all counties. But some counties may have stricter rules regarding the number of jurors. Check with your attorney to see what the minimum number of jurors in your county is.

Does the Judge or Jury Decide Guilt?

Can a Judge Overrule a Jury in a Civil Case?

A judge can overrule the verdict in a civil case. The procedural rule for that is that the losing side files a motion for judgment notwithstanding the verdict. That can and should be done directly after the verdict and then the judge may wish to entertain that motion only after briefs are filed. A motion for a new trial can also be filed because the verdict was against the weight of the evidence. This means that no reasonable jury could have come up with the verdict – in other words, the jury made a mistake. Other changes to a verdict include motions for additur or remittitur. These motions can be filed asking the judge to add or reduce the dollar amount of the verdict for being against the weight of the evidence. Keep in mind it is rare to get these motions granted. Note also that appellate courts review errors of law, not errors of fact. Thus they only look to see if a judge made a mistake. They don’t care if a jury made a mistake. That’s for the trial judge to figure out.

What happens if a Jury Cannot Reach a Verdict?

If a verdict cannot be reached it is referred to as a hung jury and the case is retried in front of another jury. Again, in civil cases that is rare and it is why the 5/6ths rule usually gets the job done.